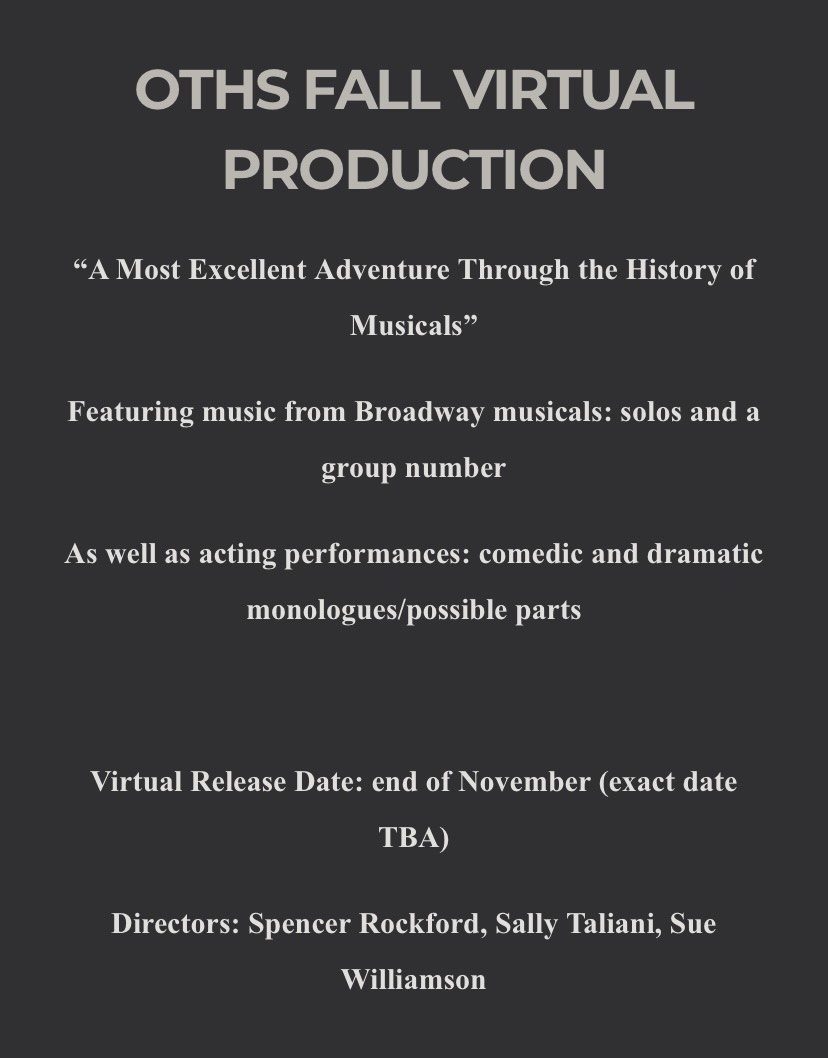 The annual fall play is still kicking and it’s coming back in a very unexpected way. This year’s play is to be an online experience like no other. The play, A Most Excellent Adventure Through the History of Musicals, is planned to take place late November or early December on a streaming platform that has yet to be decided. Junior Luna Petrosius who plays Maria Von Trapp and Anne Frank, says that it is about the history of musicals and plays. She says, “It’s a bit of a mash up of different styles, songs and monologues to show the progression of time”. Sophomore Audrey West, who plays Grizabella, states that performing this way gives everyone an opportunity to have their very own monologue and song, which is very exciting.

Since the Corona Virus presents new challenges everyday planning a virtual musical is bound to have some hiccups along the way. When asked about the obstacles of the play Luna said “It’s difficult because one of the beauties of theater is being able to work with some great people. Since we’re all online and during a pandemic we can’t really see our fellow actors and actresses. However, since we can’t have big groups, we have this blessing of being able to do one on ones with the director to help us develop our characters.” Sophomore Corinne Francis, who plays Evan Hansen, also had a few things to say about the changes. She says, “The lack of a live audience really changes things, on opening day, it’s kind of exciting, yet nerve wracking to have people in the darkness just watching you perform, but I’m going to miss it.” Corrine also explained the struggles of the online world of theater. From simple things like screens freezing to people getting kicked out during the most important part of their monologues the theater kids have not had it easy. Due to the circumstances 2020 has brought there will be no ensemble or crew which has taken positions from many people but has also given them a chance to try out the spotlight for a change.

A Most Excellent Adventure Through the History of Musicals is just what the students and staff of OTHS need right now. The theater has always been a place to bring people together and a pandemic won’t stop that tradition now. Join the Fall production as they mold a new way to perform plays. This is an experience you don’t want to miss out on.